Success Story: 6 Signs You Want to Leave the Law

The Signs I Ignored

My pivot point out of the law came when I wasn’t elevated to partner despite, in my mind, having met all the criteria for the promotion. I had thought about changing careers before and not infrequently. Still, I’d never pursued it wholeheartedly because of the investment I’d made in my legal practice, the positive feedback I got for my work, and the paralyzing effect of stable, good-paying employment. Also, I knew it would take a lot of time and energy.

But when I learned I hadn’t been promoted, I felt pressed between two counter forces: disappointment in not being recognized, and relief -- relief because I didn’t like my job, and partnership was going to make it even less appealing, as I’d be more responsible for generating the work I didn’t want to do. As I tried to reconcile those feelings, I realized that I was chasing a promotion only to make sense of a haphazard, unsatisfying decade-long career. There wasn’t much for me in the law, not at that firm or any other legal role that I knew of. Four jobs in, I knew the answer for me wasn’t to hang a shingle or go in-house or find a public interest gig. So instead I found Leave Law Behind.

In the months to follow, I would sometimes think about the other signs that revealed my misalignment with legal practice. There were many, too many to miss, and I knew most of them were there, even if, in hindsight, I didn’t pay enough attention to what they meant. Here are some of the most glaring:

Career advancement depends on building relationships in your legal and, if you represent companies, business communities. When you move from place to place, you bring your skillset and work ethic but leave behind your reputation and, largely, your connections. The Judge I worked for, a great mentor and better human, would sell us on staying and practicing in Wilmington, Delaware after our clerkships. It would have made a lot of sense. When you’re trying to build a practice, it’s counterproductive to bounce around from Wilmington to San Francisco to Charlotte to Philly, four stops in eight years like a third point guard. But I wasn’t trying to build a practice; in part, I was just drifting, but I also was trying to find the thing within the law that worked for me. And I never did. At least I got to experience working and living in a bunch of very different places. Better for a novelist than a lawyer, but enriching nonetheless.

Everything but the law.

While in big law in San Francisco, I got to work on some indigent criminal defense matters. Based on the experience, I thought that my dream job was at a Federal Public Defenders’ office. I was honored to get an opportunity at one, and there were so many great things about working there. But what I think about most often and remember most warmly tend to be the times I helped a client in ways that didn’t affect his or her criminal case.

I had one client who was charged with possession of a firearm by a convicted felon. He was in his mid-40s and had spent about 25 of the past 30 years institutionalized. A few weeks after being released from his most recent term of imprisonment, he was caught with a firearm. Police conduct leading up to the arrest was clean, and the evidence was overwhelming. So there really wasn’t much lawyering to do until sentencing. Despite that, we built a good relationship because I’d visit him in jail even when there were no case developments and just talk with him for 15-20 minutes.

One day, he called me because he’d seen a commercial for a law firm soliciting clients for a class action based on deleterious health effects from a product he said he’d been exposed to while incarcerated. I contacted the law firm for him, and we were able to help him complete the intake process and, ultimately, sign on as a plaintiff. He saw the suit as an opportunity to give something to his daughter, who was struggling financially and whom he didn’t know well and was in no position to help. It was the first time I’d seen him hopeful. I’m very grateful for a functioning legal system that can right wrongs and give redress for injuries unlawfully caused. And it was fulfilling to help someone navigate it, especially when I didn’t have to do any of the actual lawyering.

When I began practicing in Philadelphia, I needed to take the Pennsylvania bar exam. So my firm generously offered to pay me a full-time salary to work the first half of the day and let me study for the second half. If you’ve only taken one bar exam, I can assure you that studying for the second one is even less fun, especially if you’ve been practicing for a number of years and know in advance (instead of correctly assume) just how little relevance most of the material you’re learning will have to your career. But I preferred bar study to what I was doing in the mornings. At least I could find a spot with coffee (beer) and unplug from email.

This is what we, a group of first years, were told by the senior associate charged with our orientation in San Francisco. He was speaking, then, of young attorneys absorbing assignments from their more senior colleagues. It was good advice, too. Availability is the best ability for Bill Parcells and for law firms.

The advice was so good that it stuck with me eight years later in Philadelphia when a law school classmate referred to me a substantial piece of litigation. It was a large commercial dispute in an industry I didn’t know anything about. I understood the relevant areas of the law well enough to speak credibly, but the bulk of my caseload was whistleblower lawsuits and white-collar investigations. My firm had a robust business litigation practice. I figured I could send the case to those attorneys and maybe work on it a little, but not as a lead. Instead, I wound up running the case with oversight from a senior partner. An opportunity for some, I saw hours and conflict and planning and most of all stress, because I knew that I wasn’t the best person to advise the client on the dispute. I should have declined the representation. But never turn down work. So I took the case, and it was a suboptimal experience, for me and, more importantly, for the client.

Perhaps the most obvious…

From my first weekend as an associate in San Francisco, I didn’t like telling people what I did for a living. The firm represented companies that some (me) found objectionable, and while I generally didn’t work for them, I felt weighed down by the association. So that was part of it. But even when I focused on the causes I could get behind, like suing prisons, it never felt great because I didn’t like the substance of the work. So, when I knew I could get away with it, usually when traveling for work, I’d make up jobs for myself. Sound engineer, varieties of teacher, city planner. Once on an airplane, I told a guy I was a firefighter. It turned out that his childhood home had burned down. From then on, I tried to pick jobs that didn’t engender discussion. Actuary is a good one.

All your friends will be lawyers.

But I think the first sign I ignored came very early in my first semester of law school. I was sitting in torts class, having just recently figured out what a tort was. The professor broke away from whatever the day’s case study was to ensure that we all knew what we were getting ourselves into – the commitment, the focus, the hours that practicing law required. None of that fazed me, at least in the abstract. What struck hard was the part about how, between work and all the extra stuff you do to build a career, being an attorney becomes your identity, and pretty soon all of your friends are also attorneys, and you’re talking about law all the time. The sameness of that sounded viscerally awful.

There was wisdom, even truth, in what the professor said. Most of the great lawyers I know are consumed with the practice and entrenched in their legal communities. I was a mediocre lawyer with friends from all over. I wasn’t on the boards of area companies or non-profits, and I participated nominally, if at all in professional associations. And all of this was reflective of my larger approach to work. I saw opportunities to grow my practice, to be a better attorney, or just to talk about what I did as burdens. So, when faced with a decision that impacted my career, I picked the option that was bad for it more often than not.

And this was the omnipresent, flashing Starlight Motel sign, so bright you can see it from the highway, but somehow missed by me, at least for a long while: If you align with what you’re doing, you make choices that build your skills and stature, increase the likelihood of your success, and set yourself up for future opportunities. Otherwise, you bounce around from job to job, hide from work, and lie about yourself to strangers. If you’re lucky, maybe you get to see the country.

Watch the below, short video (only 6 minutes) to determine whether you should leave the law: 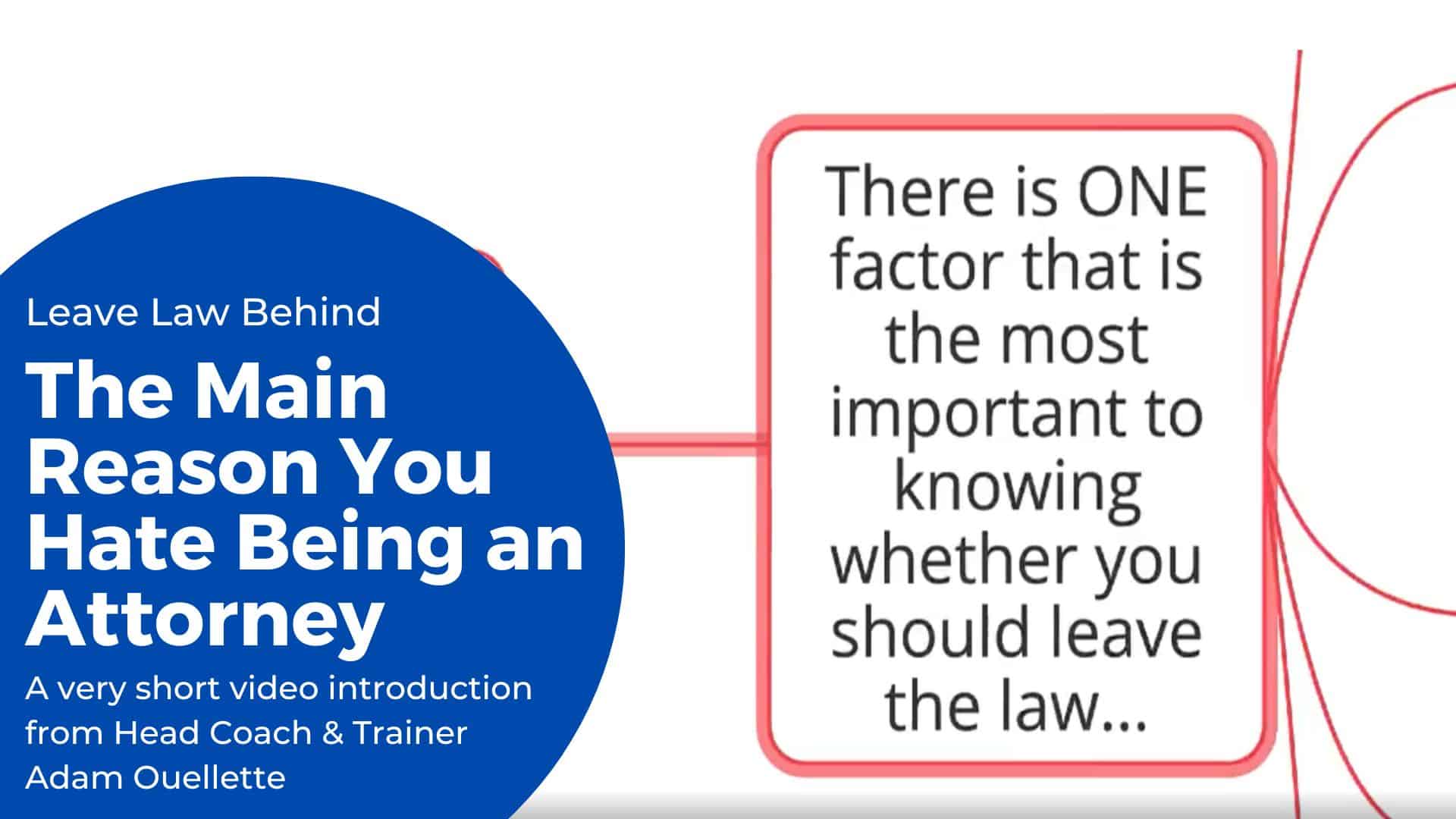 If you've watched the above video and have been practicing law for 7 or more years, click here to book a free consult call with Adam.

If you've practiced for less than 7 years, click here.

And to learn more about Casey and Adam, click here.

OUR MISSION: We believe Leave Law Behind is on this earth to show unhappy attorneys that there is a better way. We help unhappy attorneys find this better way by discovering alternative careers they love, are good at, find meaning & fulfillment within and that pays well.