Lessons from someone who just left 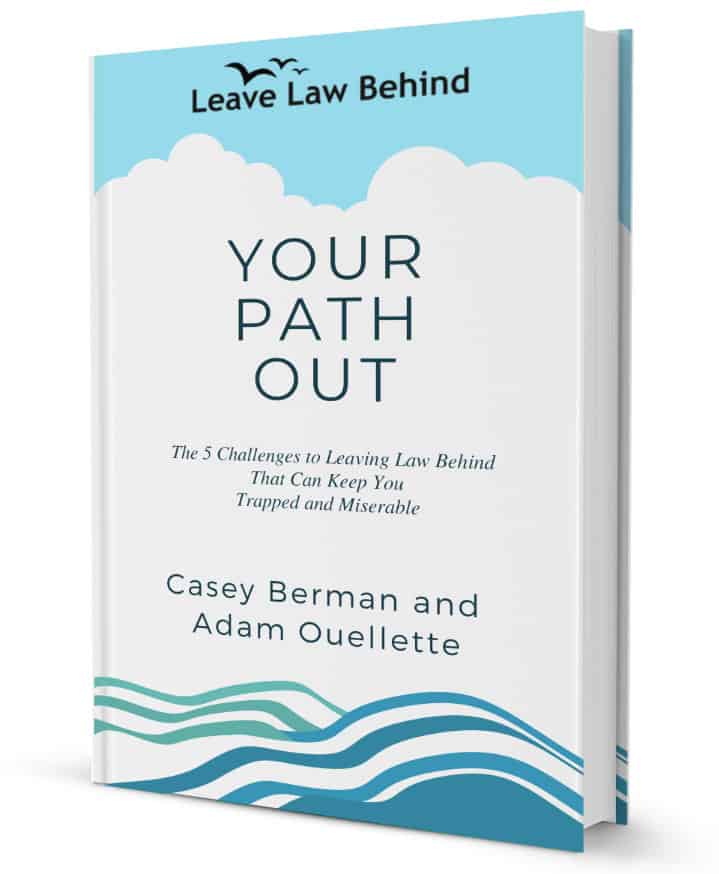 I love hearing stories from the Leave Law Behind community, of people first realizing they want to do something different to those people who take that first step and actually leave and do something else.

Lately I’ve received a lot of emails from younger attorneys, maybe just a year or two out of law school, who already know they want to do something else, but have no idea of what to do next.

Here is the story of West Kraemer, a Leave Law Behind reader, Florida attorney and recent ex-lawyer and newly minted programer and entrepreneur. He has some personal experiences I think you’ll find very interesting and actionable.

I left law behind to become a programmer, making websites and pursuing my dream of one day becoming an independent entrepreneur.

There are a few lessons I took from my transition that I would like to share, which would have smoothed my transition had I known them at the beginning of this process. I hope these lessons can help your transition go as efficiently as possible as you begin your process of leaving the law as well. (Also, please see the end of this piece for an FAQ/’How To’ on learning to code from scratch.)

The first lesson I learned in my transition out of law is: Have a plan. I graduated from law school in 2014 and just couldn’t bring myself to practice law. I admit, I struggled in law school academically. My exam essays didn’t fit in the rigid frameworks professors had set forth as their ideas for “model answers.” But, somewhat paradoxically, I excelled at legal internships. I found case law that was missed by attorneys working above me that won cases. I wrote successful appeals. I wrote an opinion for a judge on complex matters of jurisdiction that attorneys working on both sides of the case misinterpreted. And so on, and so forth. So, I thought that my struggle in law school would all be “worth it” when I got to the real world, because I was good at doing the actual things lawyers need to do; that is I had a terrific understanding of the law, excellent research skills, and I was a good writer.

However, when I graduated law school and it came time to actually become an attorney, I just couldn’t bring myself to do it. Bar exam study deadlines kept getting missed, letters to potential employers went unsent, and I felt paralyzed by it all. So, without a plan, I ended up working at a dead-end job for $30K a year with no benefits for nearly 12 months. The good thing about adversity like this is that it forces you to examine who you are and what you really want. The bad part is that I struggled financially and wasted time I could have spent pursuing my dreams.

With a plan I would have realized that I really liked running the ecommerce business I started in law school, and that making websites and running my own businesses was something that I really wanted to pursue as a career. The business I started in law school was a website where law students could buy and sell outlines. The twist that made my business model unique was that, as the outlines sold more copies, they became more expensive. I called it TopOutlines because the “Top Outline” was the one that sold the most copies. What I liked most about working on my own business was that I was in control of everything, I didn’t answer to anyone, and I was making money for myself, and not someone else.

The second lesson I learned is that there are a million reasons not to make a life altering choice, and if you’re going to make a change you have to believe that your one reason supersedes the million. My one reason (pursuing my dream of learning to code to become a digital entrepreneur) was enough for me to join a 9-week tech bootcamp that taught me how to make websites. It’s called Wyncode and it’s located in Miami. There are other programs like it all across the country, and there are also all kinds of online resources that you can use to become a programmer, but I knew I needed the structure of a formal educational environment to get it done in a timely manner, which is why I choose Wyncode. This tech boot camp condensed what would have taken me years to learn on my own into two months. So, from the point of view of transitioning to another career where there are student loans and a mortgage to take into account, making another investment in myself was absolutely, 100% worth it.

That brings me to the third lesson I learned, don’t be afraid to invest in yourself. Law school cost me an arm and a leg. And then another arm. And then another leg. But I made that initial investment in myself because I believed in myself. And, even after deciding that the law is not for me, I’m still the same capable, intelligent person who deserves to believe in himself. So I spent the money it took to learn to code. And now my job prospects are terrific.

So, broadly stated, the lessons I learned from transitioning away from law were,

2) there are always going to be reasons not to make a transition, but the drive to change your life for the better can and should surpass all of those reasons if it is what you want to do, and

3) don’t be afraid to invest in yourself because you’re still worthy.

In conclusion, if I were to revisit the point in time where I decided I needed to leave the law behind, I would have thought through a plan, ignored the million reasons not to go through with it, and invested in myself to affect the transition I had decided upon. In my case, I felt like I followed those lessons well, however, in retrospect, I would have liked to have begun the boot camp earlier, and spend less time at a dead-end job I hated.

FAQ On Learning to Code

NO!!! Math can help coding from a “how you think about the world” perspective, but you don’t need to know math to be able to code. I hadn’t taken a meaningful math course since high school before my coding boot camp began and I learned to code just fine.

3. What are some free online resources I can use to get started and “dip my toe” in the water before “diving in” to see if I like it?

4. This is hard! How do I get help with a problem I can’t solve on my own?

One of the differences between a really good programmer and a novice one is the speed at which they Google solutions. A lot of coding is just Google-ing around until you find the answer you’re looking for. So, spend time looking for answers online. Odds are someone else has asked the same question you’re having on a website called StackOverflow, or somewhere else on the Internet.

5. Computer Programming isn’t for women or minorities, look at the average representation of programmers in popular culture, it’s all dorky white guys. Should I avoid programming if I’m a woman or minority?

NO WAY!! That’s true about representations of programmers in pop-culture by and large. BUT! Coding is beautiful because anyone can do it.

Rail Girls is an awesome female-focused coding website for beginners. Check out their “guides” section for some step-by-step walkthroughs aimed at teaching women how to code (don’t be turned off by the female-friendly vibe here though fellas, this is a really, really good website for learning the basics!!).

West Kraemer was born and raised in New York City, the son of two artists. After undergrad at Hartwick College, he taught English in Austria on a Fulbright Grant, got an LLM in International Law at the University of Edinburgh in Scotland, and went to law school at the University of Miami. After deciding that being a lawyer was not for him (at least for now), he went to Wyncode Academy in Miami to learn how to be a web developer and make websites. He is currently building his startup company TopOutlines.com and looking for a job programming, or in a related field. West lives in Miami, Florida with his girlfriend Stephanie, and their dog Bridger. If you would like to contact West about offering him a freelance consulting opportunity job or to discuss leaving law behind, he can be reached at KraemerWest@gmail.com.