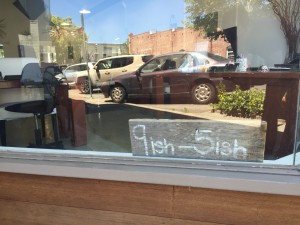 On Sunday mornings, I play basketball with a group of 10 to 20 guys at the neighborhood park. They say the tradition goes back over 30 years. And the rules haven’t changed much in that time: 4 on 4 half court, first team to hit 24 points wins, must win by two baskets, no three pointers, side of the backboard is in play, last game goes to 32.

We usually play four to five games over the course of two hours. The pace is fast, the guys are competitive but nice, and sun usually breaks through the morning clouds soon after we begin.

This past week, I played pretty well. I made some real good turn around jumpers, got two steals, I was active on the boards and had a nice pass after a pick and roll.

But of course being the perfectionist-obsessive-compulsive that I am, as I walked home after our last game, all I could focus on was what I didn’t do well: the missed (easy) 12 footer, the layup I clanged off the rim because I thought it would otherwise be blocked, the fumbled pass I made that resulted in a turn over, the overcompensating on defense that let my man get free and score an uncontested layup. And all of those other missed shots.

Seeing other attributes of success

As I sulked the flew blocks back to my house, one of the players caught up with me and said good game.

I said thank you very much, but I had to admit that I felt I missed too many shots.

He is an older gentleman. Having coached and mentored his kids, it really shouldn’t have come as a surprise to me when he stopped walking, turned to me and told me that I bring more to the game than just making shots. He said I bring energy and leadership and motivation. He said I had the energy of Jim Havlicek of the Celtics in the 1960’s, who was so quick throughout the game, that by the time the third quarter came around, his opponent was often burned out, but he had the stamina to keep playing hard.

He also said that I made more shots than I was giving myself credit. He said I was ignoring the three really good, hard-to-defend turn around jumper shots I made.

And what he was essentially saying was Casey, you’re not focusing on the whole picture. You’re just focusing on what you (think you) did wrong.

Give yourself a break.

We aren’t a lost cause

And the same advice can apply to us unhappy attorneys looking to leave the law.

We get so down on ourselves for the stuff we (feel we) have done wrong in our professional lives, that we feel we are off course, that we do not pay attention at all to the broader picture, of the things we have accomplished.

So with that in mind, here are three ways for us to appreciate all that we have done and begin to realize that we are exactly where we need to be:

1. Realize that we know what we don’t want

2. Realize that we are more than just a person with “lawyer skills”

For many of us, we think that the only skills we have are those that we use to be a lawyer.

So in the same way that I only focused on what I messed up while playing hoops (my missed shots) and not on the other areas to which I did contribute (my made shots, leadership, quickness, spreading the floor, rebounds, hustle), we unhappy attorneys looking to leave the law do ourselves a disservice in focusing mainly on what we feel we are not good at (legal research, citations, litigating, drafting, rainmaking) and not fully realizing all the ways we can add value (client management, upselling work, issue spotting, dependability, work ethic, interpersonal skills).

Much of what we can do is in hot demand in the job world at large.

3. Realize that it is not good to bully ourselves

We can listen to the negative voices in our head. We can dwell on our feelings of frustration. We can feel like a fraud and a failure. We can feel jealousy for those doing well around us.

But in reality, it only bullies us. It only makes us feel more insecure and less creative. It only hurts.

Let’s say I imagine floating up above the basketball court, not my physical body, as I’m still playing and running around, but a recording in my mind, my life’s movie, a bird’s eye view, a transcription of the game. And let’s say I were to view this recording later, a few hours after the game, I think I would like what I see. Of course the missed shots and the failed passes and the frustrations would still be there. But I would have no choice to also see it all, to see the whole court, to see what I did well, the hustle and the motivation and the stamina and the turn around jumpers and the steal and the guts and the desire. I would see this and I would smile and I would press rewind and watch again. I would like what I see, I would like what I had accomplished and I would like where I was going.