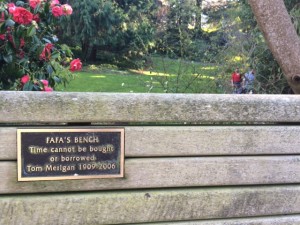 The following guest post was written by a Leave Law Behind reader, who was formerly of BigLaw and moved into technology. I hope you enjoy!

Every year, I try to do something that scares me.

In 2011, that meant jumping off the world’s highest bungee bridge in South Africa.

In 2013, feeling that my fear of heights was more or less conquered, I turned inward and focused on something that’s always been scary: saying no.

Last year, in 2014, I confronted my fear of vulnerability and performed 10 minutes of stand­up comedy.

This year’s challenge was something just as scary and just as rewarding: leaving the law behind. While each of these personal challenges of the past five years presented a new fear ­and a new opportunity for growth, ­both bungee jumping and leaving BigLaw especially reinforced my understanding that fear is illusory and that big challenges can only be conquered through small steps toward a goal.

I’ll never forget the feeling I had when I saw the Bloukrans Bridge for the first time and gazed down to the sleepy river below­­ 708 feet, 8 inches below to be exact. At that moment, the task felt insurmountable. As I sat on the canyon’s edge and looked across at the bridge, I had a clear realization: the only way I to conquer the bridge was to take small, manageable steps. So that’s what I did.

Step one: buy the ticket.

Step two: strap on the harness.

Step three: walk across the bridge to the staging area.

Independently, these were all reasonably easy steps to take. And while none of them required any real fortitude or courage, each step brought me just a little bit closer to the edge.

Pretty soon, the queue disappeared and it was my turn.

Step four: strap on the cord.

Step five: walk to the edge.

As I shuffled out, I heard something unexpected. The man who strapped the cord to my legs said, “Remember brother, you’re in the safest place in South Africa. Millions of people have jumped and no one has been hurt.”

Just like that, the fear vanished. I put my hands in the air and shifted my weight forward.

The freefall only lasted about 10 seconds, but it was the most beautiful, most peaceful, and most exhilarating 10 seconds of my life. The adrenaline heightened my awareness of all around me: the rush of the river below; the songs of the birds in the canyon; the tension from the bungee cord against my legs. I waited in blissful silence, bouncing up and down, until the crew hoisted me back up to the bridge.

“That was the greatest thing I’ve ever done,” I tell them. “I feel like I can do anything!”

Leaving the law was a lot like jumping off that bridge. Once I decided to leave, I was overcome by fear, anxiety, and frustration at the task ahead. But once those feelings settled, I realized that the same principle that facilitated my bungee jump applied here. With small, manageable steps, I could take the leap.

Step one: e​nvision the life I wanted.​

I invested the time and energy to really think about how my personality, work style, skills, talents, and interests would align within a different professional environment. I discovered that I was drawn to entrepreneurship, start­ups, and early­stage businesses. I liked working in collaborative environments. I liked the creative process required to build a business. And I liked knowing that my professional trajectory was tied to my ability, not my years spent in the profession.

Step two: f​orget about the money.​

I had to let go of the anxiety and fear surrounding both my paycheck and my student loans. Once I realized that there was no correlation between the size of my paycheck and the size of my happiness, the inevitable pay cut became just more more small, manageable step. I also accepted that while it might take me a bit longer to pay off my student loans, I will not have to sacrifice some of my best professional years working in a job that was misaligned with my talents, interests, and values.

Once I focused on a professional path and prepared myself mentally for the change in financial circumstances, I got to work. I reached out to friends. I asked them to introduce me to their friends. I found mentors. I went to happy hours and meet­ups with other entrepreneurs. I sent emails to bloggers, former lawyers, and total strangers asking for advice. I hunted on LinkedIn and Facebook for other people in my network who could help. In the end, I sent very few resumes and spent almost no time answering traditional job posts. My new opportunity came thanks to people in my network.

Leaping off the world’s highest bungee from a bridge was not scary once I realized how safe I really was. The fear was illusory. In the same way, leaving the law is not something to fear. It’s an opportunity to seize. Leaving the law gave me a chance to examine my life and my professional trajectory and make deliberate decisions aimed at creating a future I envision for myself. And leaving the law has given me a chance to do work that I find meaningful, challenging, and rewarding.

My transition away from the law has been exhilarating and yours can be too. Like the man who strapped me into the bungee, I can tell you that you’re safe. Millions of people have taken the leap without getting hurt. Many of those people are lawyers who have jumped to something else. And those of us on the other side are ready for you to join us.

Remember, too, that delaying any of these steps will only make it harder to leave the law behind. It will be harder for you to envision a life that is different than what your habits have created after years spent narrowing your legal specialty. It will be harder to take that pay cut as your salary continues to outpace those in other professions. And your network will increasingly be filled with other lawyers who do the same work you do.

Now is the time. Start today. With small, manageable steps, you can come to the edge, look out at the future, and take the leap.