Identity, money and that novel we all want to write

This week, I am very excited to have former BigLaw attorney now author Amy Impellizzeri come by Leave Law Behind to answer a few questions that seem to always come up for many of us looking to leave the law.

And Amy is perfectly positioned to help us out. Amy practiced for thirteen years as a corporate litigator at Skadden Arps in New York City. She left the law, became a start-up executive and now is a full time author.

Her most recent book is a non-fiction piece, Lawyer Interrupted, published through the American Bar Association. I was honored to be interviewed by Amy for the book, along with others in the space like Liz Brown and Marc Luber.  It’s an extremely informative, well written and entertaining description of what it takes to leave the law (buy the book). 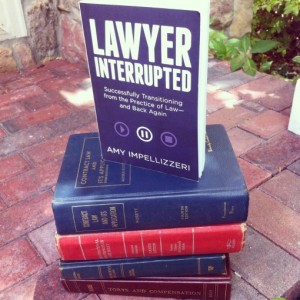 So, without further ado, let’s ask Amy some of our pressing questions!

How can an unhappy attorney “give up” all they worked on to become an attorney (law school, climbing up the law firm ladder, etc)?

This identity issue that you are describing is tied with financial uncertainty as the NUMBER ONE hurdle for attorneys thinking about transitioning from the law. And the truth is that successfully transitioning lawyers do not report that they have given up anything, or that they miss practicing law when moving on to another career.

You will still be an attorney in the next leg of your professional journey. Three years of study, a degree, and bar membership(s) do not need to vanish into thin air when you stop practicing law. And in fact, these assets will be the very tools that will distinguish you from other candidates as you transition. Every single transitioning attorney that I interviewed for Lawyer Interrupted reported that his/her law degree was the differentiator in helping them succeed in their next career.

Unhappy attorneys need to embrace the versatility of their law degree in making their next move rather than accepting the falsehood that the pinnacle and brass ring of every lawyer’s career has to be partnership at a law firm.

What about money? Lawyers are often very worried that they won’t be able to make a sufficient living if they leave the law. This uncertainty is often the greatest objection most lawyers have to leaving the law. How can lawyers, who want to leave the law, attain a comfort level that they can also succeed financially?

The real question is: HOW MUCH MONEY DO I NEED?

Transitioning attorneys need to take a hard look at their finances for areas of potential belt tightening. I spoke with attorneys who moved geographic areas to cut costs, who downsized homes, cars, caregiving expenses, and other costs. And nearly EVERY transitioning attorney (including me!) reported that one large category on the spreadsheet falls away when transitioning – that category I call “self-soothing.” These are the expenses that nearly every attorney admits to incurring while practicing law: Expensive meals, clothes, vacations, and things that are often unnecessary (—and indeed often go unappreciated) —but are accumulated in an attempt to comfort dissatisfied lawyers who feel entitled to spend the money they are working such long hours to earn.

Interestingly, of all the transitioning attorneys I interviewed for Lawyer Interrupted, the most financially successful attorneys (in the shortest amount of time) were those who “did it on the side.” That is, transitioning attorneys who pursued side ventures at night or on weekends after long days/weeks of practicing law. Attorneys who planned and experimented without the burden of completely abandoning their law firm salaries until financially viable had the quickest financial success, (and also reported not having to “jump” at every opportunity – good or bad – just to make money).

One of my favorite transitioning stories (in addition to yours, Casey!) comes from Nathan Sawaya – now internationally acclaimed Lego brick artist – who reports working on his art at night for years alongside his corporate litigation career. He would post pictures of his art on his art blog and started doing more and more commissioned pieces. One night, he reports that his “website crashed.” Literally. From so many hits on the art blog. And that was the moment Nathan knew that his full transition from the law would be financially viable. I use the “website crash” as a metaphor in Lawyer Interrupted for the moment when financial viability occurs for every would-be transitioning attorney. It might take months or years. Patience and hard work are important factors. And the reason the metaphor of a “crashing website” works so well is that it is not passive. You have to build your website, maintain it, create content for it.

And then you will be ready when it does, in fact, crash.

And almost every lawyer feels they have a book inside of them. And you actually wrote a book? How did you do that?! 🙂 Take us through what drove you to write a book, and how you actually did it.

So I did not leave the law to write a book. (And I wouldn’t recommend any lawyer do that, actually, unless she/he is independently wealthy!) Most writers I know spend many years writing alongside other careers – doing it on the side if you will. I myself wrote for years alongside my position on the executive team of a start-up company before I transitioned to full-time writer last year.

But that said, I do tell everyone (lawyers and non-lawyers) who approach me at book events saying, “I really want to write a book” to: write the book they have been wanting to write.

It was a hugely rewarding endeavor to have my first novel, Lemongrass Hope, published in 2014, and a few months later, to have the American Bar Association publish my first non-fiction book, Lawyer Interrupted. And I know no other way to write a book than to write. Every day. No matter what.

Of course (or maybe this is not obvious – as it wasn’t completely obvious to me at first), the writing is not enough. If you really want to have your book published, it will take collaboration. With other writers, critique groups, and most importantly: a high quality editor. When my first novel manuscript was “finished,” I was introduced to – and ultimately worked with – a New York Times best-selling author who also works with authors on developmental editing. Those months that I spent working on Lemongrass Hope with my editor helped to convert my manuscript into one that was actually commercially viable.

If you had a group do lawyers in front of you, all wanting to leave the law, what is the best advice you can give them … in 20 words or less …

Do not leave at your angriest, most frustrated moment of burn out.

Amy is a reformed corporate litigator, former start-up executive, and award-winning author. Amy’s first novel, Lemongrass Hope (Wyatt-MacKenzie 2014), was a 2014 INDIEFAB Book of the Year Bronze Winner (Romance) and a National Indie Excellence Awards Finalist. A favorite with bloggers and book clubs, Lemongrass Hope was named the #1 reviewed book in 2014 by blogger, The Literary Connoisseur.

Amy is also the author of the non-fiction book, Lawyer Interrupted (ABA Publishing 2015), and numerous essays and articles that have appeared in online and print journals including: The Huffington Post, ABA Law Practice Today, The Glass Hammer, Divine Caroline, Skirt! Magazine, and more.

Amy is a Tall Poppy Writer and a volunteer for the Women’s Fiction Writers Association. She lives in Pennsylvania with her husband, three kids, and one energetic weimaraner, where she is currently hard at work on her next novel, Secrets of Worry Dolls.