The most convincing, forceful, undeniable reason that compelled me to leave the law 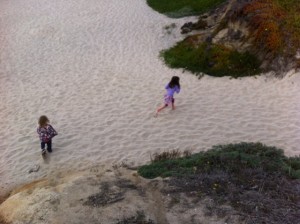 I was in my friend’s law office last week, and we were discussing a side project that I’m working on. We were interviewing and brainstorming with another person who may help us with this project, a person that my lawyer friend introduced me to. As we discussed things, in his beautiful law office conference room high above the city, I could tell how my friend was enjoying himself. I wasn’t sure if he was really interested in what the other person was saying, or if he was interested in what I had to say, or in the subject matter. I wasn’t sure. But he was excited, engaged, interested. And he was very talkative and collaborative and engrossed.

At a break in the conversation, when we were summing up the talk and discussing next steps, he leaned back in his chair and put his hands behind his head and smiled a bit and said “This is real good. Real good. I like this kind of stuff. There is no deposition to manage, no judges to persuade, no briefs to trudge through. This is so creative. We’re doing something, we’re making something, we’re planning something. It’s so proactive. What I do every day as a lawyer is SO reactive.”

Another story, from 9 years ago:

I was VP Operations and In House Counsel from 2001 to 2004 for a company called Workshare. We developed the redlining tool that many transactional lawyers use, DeltaView (now Workshare Compare). It was a great product, used by almost all law firms and consulting firms, and I really enjoyed my job. It was a start-up that we grew into a fully functioning robust company. It’s still around. I have great memories and learned a ton.

But I left in July 2004. Pretty much just leapt and hoped the net would appear. And the main reason why I left my job – a job my friends called me crazy for leaving, a job that was perceived as being so much better than a normal firm job, a job that for many was a stepping stone to greater and greater in-house jobs in Silicon Valley – was because my role was so reactive. And I didn’t like that.

I was the one who negotiated the final (often mundane) details of the licensing agreement (“Let’s do a 30 day termination clause, instead of 45, okay?”). I was the one in the office late on March 31, June 30, September 30 and New Year’s Eve finalizing deals so our sales guys could get these commissions in before the quarter’s close (“Casey, we’re gonna close tonight, right?”). I was the one telling the VP of Biz Dev that his (sincerely) great marketing idea might violate our partner agreement (“Sorry, man, I just don’t think we can do it.”). I was the one scrambling to put out fires (“What do you mean we don’t have our tagline trademarked?”). I was the one who dealt with ongoing issues with our landlord (“We need to renew our lease.”).

And while these scenarios seem par for the course for an in-house counsel, and may be even attractive to many of you who aspire to be an in-house, I gradually grew uninterested in the role. My day to day task mostly required me to react to certain things and find a solution. Sure, we did long term planning, and there was some preemptive risk management – I did “look ahead” some times. But a lot of the job was about responding to an external circumstance. There wasn’t much creating, brainstorming, thinking outside of the box or collaborating.

And back in 2004 was when I realized that an in-house counsel role, for all of its perceived goodness, just wasn’t for me. It was right for others, but not for me, and I needed to get comfortable with that. I needed to realize that I wasn’t crazy or going insane, and just because everyone else thought being an in-house lawyer was great and ideal and perfect, it was okay if I didn’t share that sentiment.

I didn’t know what Unique Genius was then, and I wasn’t really sure which actual job would let me do all of these new things I suddenly knew I wanted to do, but nonetheless I left my job in 2004 with a rough plan, not much savings, a wedding coming up in a few months and wide eyes and a whole lot of burgeoning excitement and almost debilitating anxiety. I was fully invested in exploring my strengths and skills.

And while I was pretty clueless about a lot, I knew I still needed to pay the bills. So I had taken a few baby steps and in the previous six months had lined up a consulting gig and convinced my company to let me do freelance legal work until they found a new in-house counsel. I was off and (crawling … stumbling) running.

And now, almost ten years later, after a lot of mix ups and mistakes and successes and creations and sleepless nights and blog posts and accolades and public speeches and near misses and far misses, when I hear another attorney tell me how he wishes he could be more proactive, I can only smile and think back to when I thought the same thing … and then (instinctually, clumsily, cluelessly, passionately) acted on it.