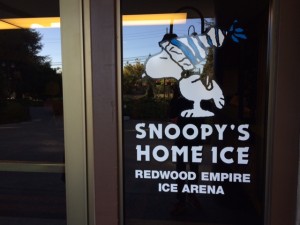 My wife and my kids ice skate. And there is nothing I can do about it.

I do not know how to ice skate. And I’m actually kind of afraid of it.

I love physical activities and playing sports. But growing up in San Francisco, there weren’t many ice skating rinks.

There was one dilapidated rink out near Ocean Beach. Some other ones far away in the suburbs.

So what this means is I didn’t grow up ice-skating. I don’t know how to do it. I don’t have much interest or passion for it. I have no muscle memory for it. I never really thought much about ice-skating. And besides the temporary, once-a-year skate attempt during the holidays, I didn’t think I’d ever have to throughout life.

Until I had kids. And until my wife told them that she ice skated when she was young and loved it and was signing them up for lessons at the recently built, year-round ice skating rink in downtown San Francisco.

Now I was forced to think about ice-skating.

And what I’ve had to think about I don’t like. To be honest, I’m actually kind of scared of ice-skating. I don’t know how. I may hurt myself. It’s cold. It’s new.

So this weekend we’re up visiting Santa Rosa, about an hour north of San Francisco. And, as luck would have it, there is a local ice skating rink here. It’s actually a “Snoopy” rink – Charles Schultz, the creator of the Peanuts cartoon and Charlie Brown, lived in Santa Rosa and there is a museum, information center and a skating rink all dedicated to the Peanuts Characters.

The rink is called “Snoopy’s Home Ice”. There are funny statues of the Peanuts characters, a gift shop, a café and, yes, a big fully functional, ice skating rink.

As we get out of the car, my daughter instructs me that I’m going to skate with her and that her brother will skate with my wife and that my daughter is going to show me the new gliding technique (one foot up in the air) she recently learned.

So I told her “just because” and bought her some Starburst at the snack bar.

The sugar distracted her, but it didn’t help me at all. The ice was still intimidating to me. It still scared me. I felt paralyzed.

Once my sugar-infused kids and my graceful wife made it onto the rink, I took a moment and then realized that much of what prevents me from beginning to ice skate is generally the same that prevents many of us from exploring careers and roles beyond the law.

1. I don’t know how and I could get hurt. Of course I know I can easily take ice skating lessons. But right now, ice skating is this murky, opaque, unclear place. It’s cold. There is the white glare. It’s inside. It’s fast. It hurts when you fall. And I have no idea how the balance or the form or the technique is supposed to work. I have no idea how you can skate so straight on this little thin blade. I imagine that I can easily tear my ACL or break my wrist.

2. It’s difficult. Of course the people skating on the rink make it look so easy and effortless, but ice-skating is really hard. You need to keep your legs steady and keep your balance, be able to squat, ad be able to fall and get back up. It’s not easy. Like anything, becoming proficient (not perfect, just pretty good at it) takes a while. And it takes effort and discipline and dedication, even if I’m just going to do it as a hobby or to enjoy with my kids.

The same thing goes for looking for a new job and a career in line with our Unique Genius. Sure, we know that there is a structure and a well-thought-out plan and people who have done it before to serve as models, but let’s be honest, it all looks like it is so easy and logical and possible … for “them”, but not for us. For those of us who are still scared to leave the law, we don’t think it’s easy. And we feel we are so far behind. And we feel it’s so difficult to get motivated.

3. It takes time. I know that to really learn how to ice skate (and enjoy it and become pretty good at it) I’m going to have to carve out the time. I’m already pretty busy, so I’m kind of at a loss as to when I’m going to be able to find the time to take lessons.

And many of us also find it hard to really get any traction on thinking of leaving the law, much less exploring it and acting on it. We get slammed with work. We get a new deal or trial or matter that requires our full attention. And in the few hours where we’re not at our office, we’re thinking about work as we go to sleep or we’re trying to fit in a time to workout or see friends or spend time with the family. And so we ask ourselves how can we also take on all of the work required to leave the law?

And the same goes for us hoping to leave the law. Each of us doesn’t really know that many people close to us who have actually left. We don’t know what jobs exist beyond transactional jobs or litigation jobs or academic jobs. Leaving the law is a world totally and utterly new to us.

And as the Zamboni began to rumble to clean the ice, I then remembered that when we’re avoiding making a big (read: necessary) change, there are usually four main drivers that compel us to overcome resistance and do it: We have no other choice, we are highly curious for adventure and change, we are desperate or we give in to peer pressure.

So when it comes to ice skating, for me, I have no other choice – I either participate in this activity, or I miss out on spending quality time with my kids on the ice.

And I’ll admit, I’m kinda curious about learning this new skill. Ralph Waldo Emerson said “In skating over thin ice, our safety is in our speed”. I’m becoming excited about that idea.

And while I’m not desperate to learn, there may be some peer pressure – my kids and my wife insist I learn (and it’s not in my personality to sit on the sidelines forever).

And this analysis put me over the edge. I’m going to do it.

A small baby step is all it takes. I’m going to take a private lesson. And I can arrange one that fits my schedule it turns out. Yes, I’m doing it. If you’re ever down at the San Francisco Yerba Buena ice skating rink, and see some proud forty year old moving inch-by-careful-inch across the ice with a seven year old and a four year old and a smiling wife shouting encouragement and tips, that’ll be me.

Ice skating is still new to me. It’s no less cold. It’s still hard to fall on. I still have no idea what to expect.

But these are all not reasons to continue. I know one day I’ll learn and be pretty good at it.

I’m scared. But in clearly spelling out my fears, weighing what was really keeping me from moving forward and identifying a small babystep, I’m no longer paralyzed.